Posted on July 20, 2013 by drronthomasjr
Controversy sells newspapers, and magazines, as well, with the current Rolling Stone cover featuring Boston Marathon bomber Dzhokhar Tsarnaev generating lots of buzz. Setting aside its resemblance to a classic cover featuring Jim Morrison of the Doors, it provides an opportunity to discuss the eerie connection between terrorism and the news media. 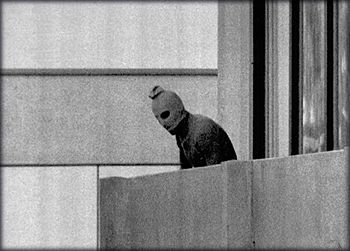 I began serious study of this symbiotic (parasitic?) relationship decades ago, inspired by the 1972 Munich Olympics case. The entire hostage taking of the Israeli team members was being broadcast on live television since ABC Sports was there to cover the Olympics. After the failed rescue attempt at Fürstenfeldbruck Airport, ABC Sports anchor Jim Mckay relayed the news that “They’re all gone,” a sobering tagline for the nine Israelis killed at the airport, as well as two others killed the previous day at the Olympic Village.
It seems that every terrorist incident afterward had its own TV news package with graphics and theme music provided by the networks to differentiate their coverage. During the 444-day (1979-1981) hostage crisis in Teheran, Iran, where the US Embassy had been seized, ABC News began running updates every night at 11:30 Eastern, hosted by Ted Koppel. As the incident drug on, ABC branded its coverage as “America Held Hostage: Day ___” as the drama drug on, and on, and on.
Once it became clear that nothing new was going to happen, ABC recognized that they were cutting into the ratings of The Tonight Show, starring Johnny Carson, and realized there was a market for late night news. Before there was CNN, MSNBC or Fox News, there was “Nightline” on ABC. If you enjoy that show today, be sure to thank the Ayatollah Khomeini for it.
During the manhunt for the Boston Marathon bombers, you couldn’t escape from it on television. I was on a business trip to Kansas City and it was running everywhere from the airports to the hotel room to the bar. It seems that networks understood the Zapruder film fascination of the American public which doesn’t want to miss someone getting killed live on TV.
Even an arch-conservative as I am perceived to be (although I think of myself more as an Objectivist/Libertarian hybrid), had a subscription to Rolling Stone in the past. For an entertainment magazine, it was great but I subscribed for the writings of gonzo journalist Hunter Thompson. Yes, it makes an odd looking bookshelf to have Hunter Thompson and Ayn Rand sharing space with Carl Sagan and Tom Clancy, but I digress again … 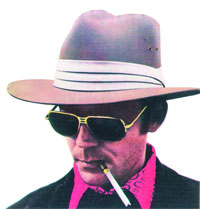 Of course Rolling Stone understood what they were doing would generate controversy. It would also remind America that they existed and still produced a product made from dead trees. The profit motive was readily apparent and that’s not a bad thing in a relatively free market economy. Still, I wonder how Thompson would have described his former employers.
Pimps, whores and “greedheads” come to mind.