Book Review: I Am Soldier of Fortune

Seldom is a magazine identified with one person. There are Hugh Hefner and Playboy, Gloria Steinem and Ms., William F. Buckley, Jr. and National Review. In those cases, the magazine is an extension of that person’s vision and philosophy, with the printed page inseparable from its publisher. 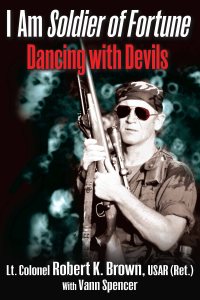 So it is with Soldier of Fortune magazine and its publisher, Lt. Col. Robert K. Brown, USAR (ret.). It is especially apt, therefore, that his long-awaited memoirs are titled simply I Am Soldier of Fortune: Dancing with Devils. There would be no SOF without RKB, as both are widely known simply by their initials.

When I was a reporter the Panama City (FL) News-Herald back in the 1970s, I was covering the campaign for the First Congressional District. There was an interesting candidate in the Republican primary, Maj. Mike Williams who had recently returned to the Panhandle after some adventures with the Rhodesian Army. To get some background on this candidate, I went to my buddy at the downtown newsstand to get the magazine write-ups of Williams’ time in Africa so I needed some issues of Soldier of Fortune.

Williams was a great interview, exactly the barrel-chested picture of a combat officer, but too plain-speaking to be a successful politician. However, he excelled as a contributing editor at Soldier of Fortune and a member of Col. Brown’s inner circle of adventurers.

I had the hubris to think that I would make my living as a writer of men’s action-adventure novels. To establish credibility in that area, I knew that getting published in that genre of magazine would be important. Having examined SOF in my research on Williams, I said to myself “Hell, I can write this stuff.” I set out on a writing binge and turned out four articles that I thought would fit. Col. Brown bought one. Now .250 is a middling batting average but pretty damn good as a first time magazine writer.

I have never forgotten that I made my first national sale to RKB/SOF and that tearsheet opened doors to a lot of the other places I ever got published. As I came to do a few more pieces for the SOF family of magazines, I came to know more about the man with the vision.

In the first half of the 20th Century, there were many magazines aimed at the men’s market and they weren’t skin magazines. They were stories of rugged adventures, fact and fiction, about soldiers, hunters, sailors and explorers. They took the place of the crime and adventure pulps of the 30s and by the 50s and 60s the news agents were selling titles like Argosy and True with lurid painted covers of bare-chested men with blazing guns, women in torn dresses, and slathering animals and thugs menacing them. Writers like Ernest Hemingway and Jack London had been found in these pages.

Coming out of Vietnam, then Special Forces Captain Bob Brown had a bunch of stories to tell, several in that “stranger than fiction” category. However, magazines had lost a lot of their appetite for the grittier prose. In fact, one of RKB’s rejection letters said “This belongs in one of those hairy chested men’s magazines we used to publish.”

If the venue didn’t exist, Brown figured to revive it and publish his own magazine and Soldier of Fortune was born in 1975, ironically the same year as the fall of Saigon.

From that point forward, the lives of RKB and SOF are basically indistinguishable. While a lot of the early articles drew on the Vietnam experience, there were little wars all over the world and Brown went out first hand with his correspondents to document the action in Asia, Africa, Central and South America and everywhere else.

RKB depicted in his Afghan garb. Painting by Ken McSwan from Uniforms of the Soldiers of Fortune by Leroy Thompson, Blanford Press, 1985

It didn’t take long for SOF to distinguish itself as one of the best sources of frontline combat reporting going. When the Soviets invaded Afghanistan, Brown figured he ought to mount an expedition to see what was going on. If he got the chance to put a few rounds on a Soviet target in the bargain, so much the better. With every issue in my own library, I was able to trace SOF‘s development into a slick professional production that regularly was seen as a vehicle for Hollywood producers to promote the latest Stallone or Schwarzenegger film; their action movies got a publicity “rub” from being associated with the real thing.

This is what has really made SOF different. It is the magazine for those who not only have “been there, done that” but those who still lace up their boots and do it some more. Brown is often found in the pages of the magazine in the midst of overseas training exercises, safaris, gun shows (RKB is a long-time Director with the NRA.) and has earned so many foreign sets of jump wings that he could never wear them all.

A couple of decades passed, SOF continued to prosper but I had moved on to other activities. I was in Denver, giving a counter-terrorism seminar to an investigators conference in the late 90s and had an afternoon to kill. I walked over to another convention facility where one of the country’s largest sportsmen shows was being held. I looked to my right and, at another ticket window, there was Col. Brown, down from his offices in the “liberal-occupied” enclave of Boulder. Brown didn’t mind telling anyone that he did his business out of the “People’s Republic of Colorado.”

After reintroducing myself, we exchanged cards and he suggested I should drive up to Boulder for a visit after my seminar. I assume he went on to see safari outfitters to plan his next African hunt and I wandered through the show deciding what I was going to get myself for Christmas. A couple of days later, I got the tour of SOF HQ and the rooms filled to the ceiling with photos, tapes, maps, and “artifacts” from nearly every armed conflict anywhere in the world. We had a great visit, a fine Mexican lunch and alcohol was involved as we caught up.

I stayed in touch sporadically over the years as I moved about and Brown just kept on the move. Soon, he announced that he was working on his memoirs, based on the vast collection of materials in those offices. Now that the book is out and my copy has arrived, I can attest that it truly covers the breadth and depth of this well-known (and sometimes controversial) magazine and its maximum leader. As he does in real-life, Brown just tells it like it was in these pages. In a small way, I can see bits of my career in the index through people who I had the chance to meet and work with in some fashion over the years (Alexander Haig, Oliver North, terrorism author Neil Livingston, as well as Maj. Williams).

If it hadn’t been for Col. Brown, I think my career would not have been nearly as successful as I certainly got a credibility “rub” from Soldier of Fortune and him … which is to say the same thing.